Save on Custom ORIGIN PC Systems this Memorial Day!

For a limited time, ORIGIN PC is running a special promotion. Customize your own desktop or laptop and get free shipping as well as bonus peripherals, up to a $295 value.

Those looking for a custom laptop are in luck. We recently released our new thin and light laptops, including the winner of PC Mag's Editor's Choice award - the EVO17-S. Included with all custom laptops, are an M65 PRO RGB FPS Gaming Mouse, VOID ELITE STEREO Gaming Headset, and ORIGIN USB 3.0 32GB Flash Drive. With its included free shipping, this promotion is worth up to $200. There's no better time to upgrade, especially if you're looking for excellent, portable performance. Working professionals can look towards our NT-series workstation laptops to meet their professional needs as the new systems can be equipped with up to an NVIDIA GeForce RTX 3080Ti GPU for graphics intensive projects.

Aside from the ultimate customization and performance, all ORIGIN PC systems are backed by lifetime 24/7 US based support.

ORIGIN PC recently released a new, limited edition desktop collaborating with Bajheera. Known for both "Games and Gains," Bajheera and ORIGIN PC have proudly worked together for over 10 years. This calls for celebration. Introducing the Bajheera Signature Series. This Ready-To-Ship (RTS) desktop is not only powerful, but includes a custom UV Print as well as a laser etched signature from Bajheera.

Aside from the collector's appeal of the item, the RTS desktop features next-gen hardware to back it up. Upgrade your setup with an Intel Core i9-12900K processor, NVIDIA GeForce RTX 3090, and more. Ready-To-Ship systems ship within 1-3 business days after payment processing.

Interested in personalizing your own system? Customize a Gaming Desktop or Workstation Desktop to meet your specific needs. All ORIGIN PC systems include lifetime US-based 24/7 Customer Support as well. Processors can be upgraded up to an Intel Core i9-12900KS or AMD Ryzen 9 5950X, while GPUs go up to the premium NVIDIA GeForce RTX 3090Ti Graphics Card. 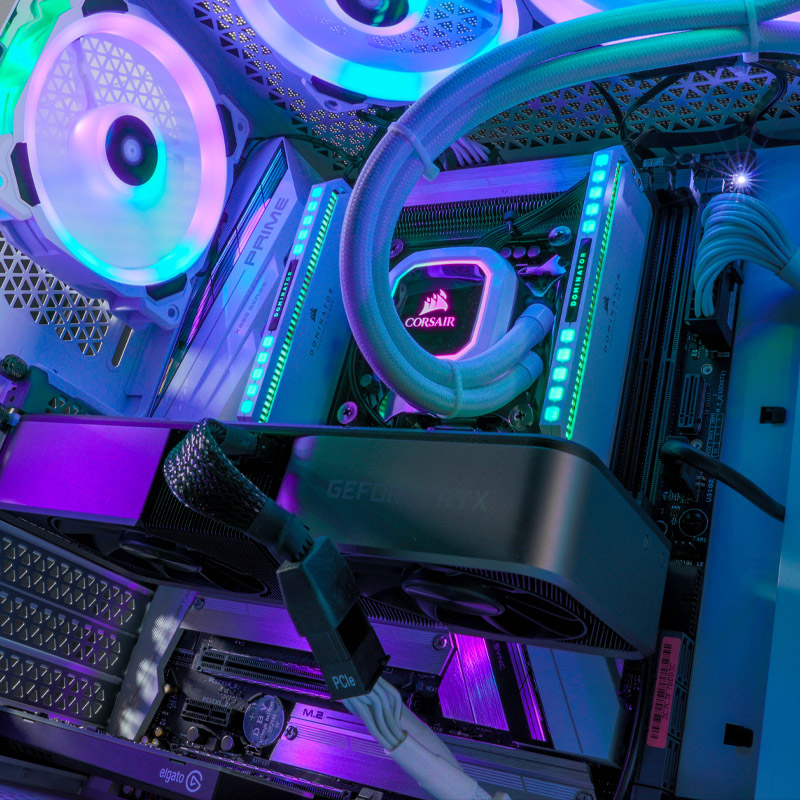 Singing the highest praises, they noted that the "ORIGIN PC NEURON 4000X delivers a premium boutique gaming PC experience with tons of horsepower for the most demanding games..."

The NEURON is one of ORIGIN PC's award winning mid tower desktops. Every component, from a CORSAIR 4000 series case to a next-gen processor and graphics card, is designed to provide the ultimate gaming experience. They're future-proofed with top-tier hardware to provide the speed, cooling, and graphics gamers need.

Users can customize their own NEURON system with up to the latest 12th Gen Intel Core i9-12900KS, NVIDIA GeForce RTX 3090Ti GPU, and more!

Learn more about our Gaming PCs. 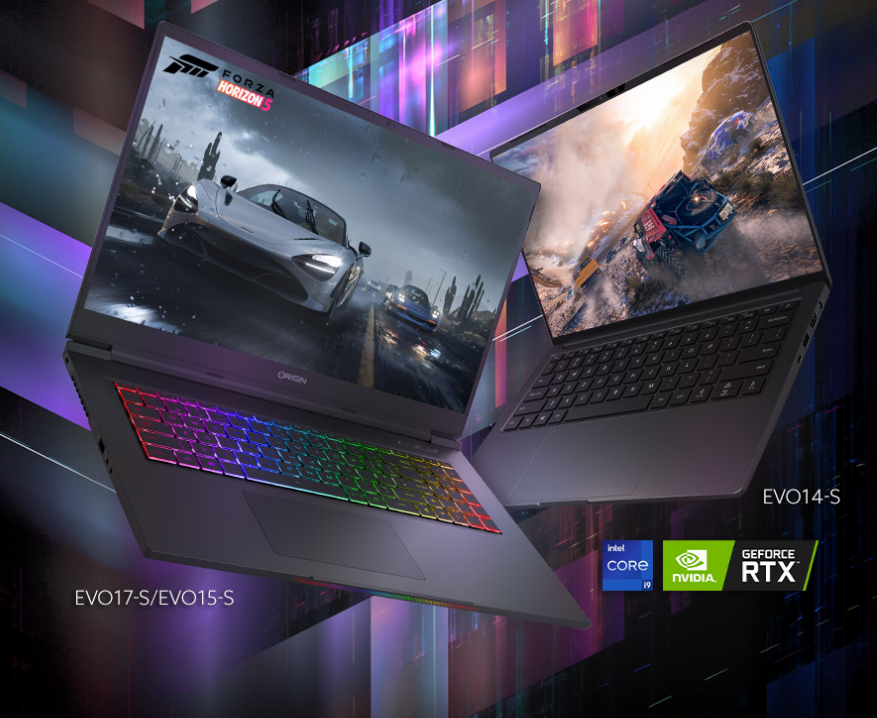 ORIGIN PC is happy to announce the launch of our latest thin and light laptops.

Our new, upgraded flagship models are the EVO17-S and NT-17. The EVO17-S comes equipped with an Intel® Core™ i9-12900H 14-core processor, an NVIDIA® GeForce RTX™ 3080 Ti GPU, and support for up to 64GB of DDR5 DRAM, while a 240Hz QHD screen displays all your games in stunning detail. Dedicated to providing the ultimate gaming performance, ORIGIN PC is proud to offer top of the line laptop systems.

We're also introducing the two brand new thin and light laptops - the EVO14-S and NT-14. Along with their 14" displays, they provide remarkable small form factor performance and can be equipped with up to an NVIDIA GeForce RTX 3090 or NVIDIA RTX A6000 using an external GPU. Weighing only 2.4 pounds, the new EVO14-S and NT-14 provide users the excellent power ORIGIN PC is known for without compromising the portability benefits of a laptop.

The EVO15-S, EVO17-S, NT-15, and NT-17 systems feature massive hardware upgrades to meet the growing demands of users. For those looking for an expanded display, Thunderbolt 4 and HDMI ports allow up to two additional monitors.

NVIDIA's latest GeForce RTX 3090 Ti is now available with ORIGIN PC! Customize your own system with the latest, most powerful hardware available to date. Systems like the ORIGIN PC NEURON, MILLENNIUM, and GENESIS can all be equipped to bring gamers a next-gen gaming experience. The new GPU also provides professionals, creators, and streamers power that prepares them for both the present and future.

The GeForce RTX 3090™ Ti is colossally powerful in every way, giving you a whole new tier of performance. It’s powered by the NVIDIA Ampere architecture, which doubles down on ray tracing and AI performance with enhanced RT Cores, Tensor Cores, and new streaming multiprocessors. 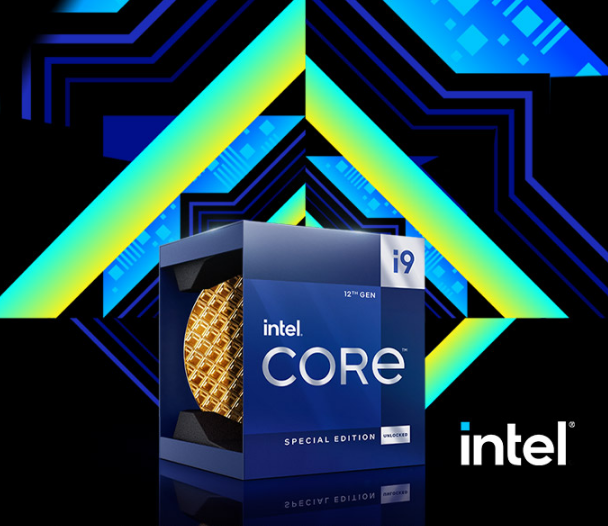 ORIGIN PC is proud to announce the latest Intel® Core i9-12900KS Processor is available for its custom Desktop Systems. Dedicated to providing the highest performing systems, customers can configure a system with one beginning March 28, 2022.

Create the ultimate PC, whether for work, play, or both! Both Workstation and Gaming Systems can be equipped with the new processor. Those looking for an efficient work machine can customize a Workstation Desktop such as the M-Class or L-Class.

On the other hand, ORIGIN PC also offers some of the world's best Gaming Desktops. Systems like the CHRONOS and MILLENNIUM frequently win awards. Known for its style and performance, the MILLENNIUM provides peak aesthetic and performance.

Customize your own ORIGIN PC system, powered by the new Intel® Core i9-12900KS Processor at ORIGINPC.com.

On 3/25/22, ORIGIN PC featured a special, four player co-op adventure into the recently released world of Tiny Tina's Wonderlands. CORSAIR, ORIGIN PC, and Elgato teamed up for a special stream which you can still watch for yourself. The latest stream was recorded and you can watch the gameplay for yourself, and meet our talented hosts.

The new game features gameplay familiar to Borderlands fans. Those unfamiliar with the franchise can still enjoy the unique elements of gameplay, allowing for players to approach combat and customize characters in their own way. Tiny Tina's Wonderlands and CORSAIR have also teamed up to bring out the most from their iCUE ecosystem. With the latest CORSAIR iCUE software downloaded and the game open, you'll witness beautiful, synchronized lighting that reacts to in-game events. 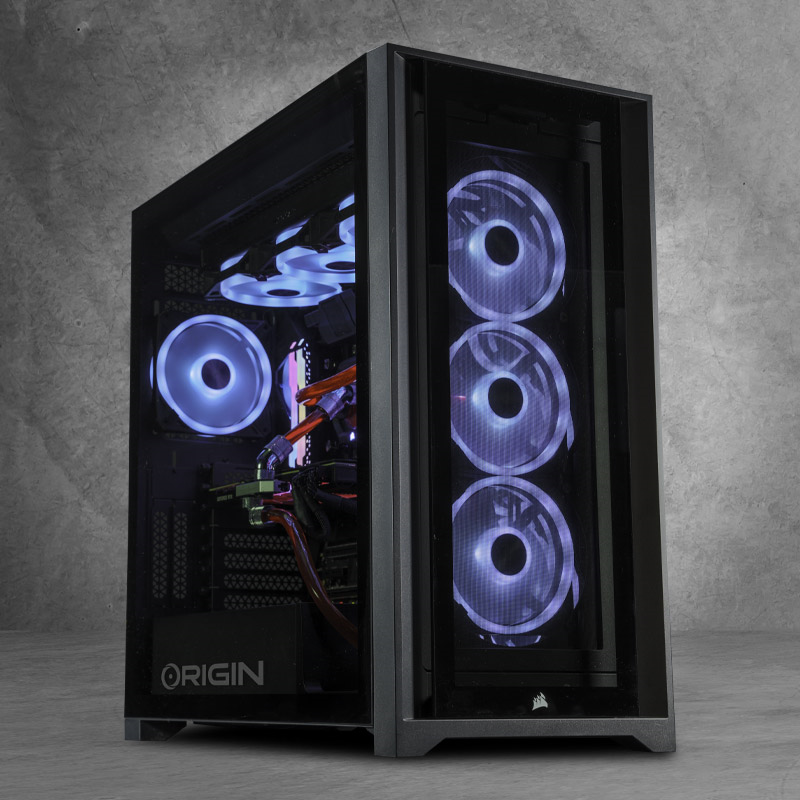 In recent reviews from Forbes and TechRadar, there was no shortage of positive feedback for the ORIGIN PC MILLENNIUM.

Forbes took at look at the latest model, the MILLENNIUM 5000T. Featuring CORSAIR's latest case, the desktop instantly catches the eye. Built with the latest tech and hardware, Forbes called out the spacious interior, leaving plenty of room for airflow. With the optimal cooling setup and help of an NVIDIA GeForce RTX 3090, the PC could easily play games even in 4k. The biggest praise was given toward its gaming performance, featuring near flawless performance on all games aside from Elden Ring. However, this was attributed to it being a port, rather than the gaming PC itself.

TechRadar reviewed the MILLENNIUM 5000X, giving it a 4.5 out of 5 star rating for its incredible performance, the excellent customer service provided, and the number of configuration options available. The 5000X case provides an easy to adjust framework. Any customizations or future upgrades are made easy, especially with ORIGIN PC's lifetime customer support. Again, the major highlight of this review was the gaming desktop's ability to easily run modern games at the highest settings. Combining service, quality, and limitless customization options make the ORIGIN PC experience a premium one.

Those interested in learning more about ORIGIN PC gaming desktops can visit: https://www.originpc.com/gaming/desktops/

Those interested in learning more about ORIGIN PC workstation desktops can visit: https://www.originpc.com/workstation/desktops/ 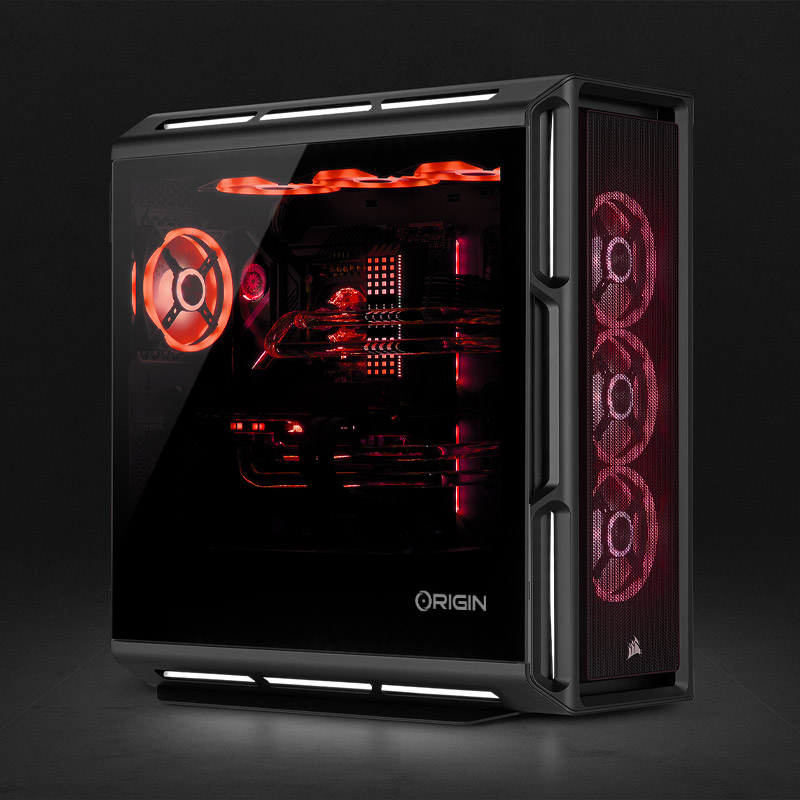 MILLENNIUM Earns 4 out of 5 Stars from Tom's Guide

ORIGIN PC's MILLENNIUM Desktop continues to draw praise from reviewers. Noting its top-tier hardware, Tom's Guide shared some positive feedback toward the system they received and tested. They noted the MILLENNIUM is one of the best Gaming PCs you can buy and for good reason. Equipped with up to an NVIDIA GeForce RTX 3090 GPU and an Intel Core i9-12900K processor, you can customize a monster custom system with the latest available hardware.

Ultimately, users can customize the MILLENNIUM to meet their own needs. Choose from a variety of cases like the CORSAIR 5000X or the latest 5000T. For those that want their PCs fast or who would prefer not to pick out their own hardware, ORIGIN PC also offers Ready-To-Ship (RTS) systems.